DONATE
Sierra Leone is a small nation in West Africa, plagued by civil war from 1991 to 2002. The war destroyed the country's infrastructure, including the educational, economic, and health systems. The Ebola outbreak in 2014-2016 killed more than 11,000 people. Then in 2017, there was a mudslide that took over 1,000 lives. In March 2018, the new political party elected in Sierra Leone promised free education once they won the election. Although education is now free, there aren't enough teachers and supplies to provide quality education. 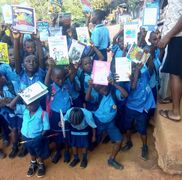 Why are we doing this? Board member Belinda was sending books and supplies as she could to her native country to help out children. Friends wanted to help her with her cause, but they wanted to be able to deduct their contributions. She wasn't ready to start a nonprofit, so we partnered with her to get books and school supplies to children in Sierra Leone.


Achieved: Because of your action, in 2020, we sent a container full of backpacks, books, and school supplies to benefit over 20 children.
Proudly powered by Weebly